From Eastern Finland to China’s Smartphones 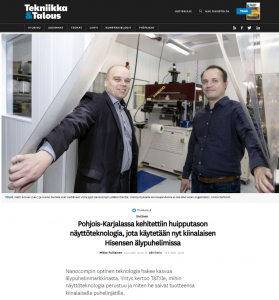 Along the strikingly cold winter days of nearly -30 degrees, Finnish tech-magazine Tekniikka&Talous (Technique&Economy) published an equally striking report about Nanocomp on 12. February 2021 Issue 05/2021. As the manufacturer of lightguide plates, Nanocomp is living in a new age of optical technology, whose solutions have been applied to E-book readers, laser appliances and sports watches, etc. Today Nanocomp is diving into the deep sea of mobile phone markets. Its components have been intensely accepted by the Chinese electronics giant Hisense to their newly released smartphones. This new business scenario has come to a result from a long developing journey.

EPD displays have been widely applied to reader devices and recently the smartphone market has opened its door to it. “Although EPD technology currently doesn’t provide the same kind of color gamut and refresh rates as e.g. LCD, and therefore does not suit well for content such as gaming or video playback, it still suits especially well for viewing digital comics, magazines and popular Manga animations. It should be noted that EPD does not require electricity to show static content, nor front lighting until in dark environment, which makes it really energy efficient. On the other hand, EPD is well visible under direct sunlight, unlike OLED and transmissive LCD”, as the Business Development Manager, Marko Parikka indicated.

“We have engaged in EPD based solutions for almost ten years and produced tens of millions of components of the kind. In the last few years, we have focused on the mobile phone markets and put great efforts to our product development”, the Vice President & Director of Sales and Marketing, Matti Eronen told the magazine.

Currently the China unit of Nanocomp is involved in die-cutting and final inspections. Eronen has emphasized that the company would strategically remain the critical process in Europe while benefit from the China operations to gain the competitive advantages. The pandemic of COVID-19 did bring challenges to Nanocomp due to the complications and price increase in logistics. Furthermore, restrictions for travelling have slowed down the communications with customers as well as within the company. Nanocomp has its sales team in mainland China, Taiwan and Japan, their local sales representatives work closely with the core team in Finland.

The initial talk with Hisense occurred around one and a half years ago. The Chinese party took the first step in seeking for a substitute to their local subcontractor. Nanocomp was able to react promptly and provided the samples with a far more satisfying quality. However, considerable patience is demanded along the negotiation. The Chinese messaging application Wechat has become one of the most important communication channels, whereas official affairs are confirmed through emails. The major shareholders of Nanocomp include Kyösti Kakkonen from Joensuun Kauppa ja Kone Oy and Evonik, a German chemical industrial corporation, among others.