A Reward to Our CEO Veli-Pekka Leppänen 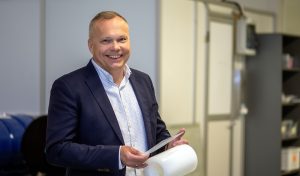 Veli-Pekka Leppänen, CEO of Nanocomp Ltd. has been selected as the University of Eastern Finland’s Alumnus of the Year. The award was presented to Leppänen in an alumni meeting held in Joensuu on 5 November. The Alumna/Alumnus of the Year award recognises and celebrates the achievements of the alumni of the University of Eastern Finland in their chosen fields.

Leppänen is the CEO, a founding member and a shareholder in the Joensuu-based Nanocomp Ltd. Founded in 1997, the company has its roots in what at the time was known as the Department of Physics of the University of Joensuu.

“Veli-Pekka Leppänen has highlighted academic excellence in eastern Finland, and its potential in photonics, both nationally and internationally. He has, among other things, served on the Board of Photonics Finland, and been actively involved in the development of the field of photonics and, more broadly, the university, especially in the field of university-business collaboration and innovation activities. Nanocomp Ltd. is an academic start-up and a significant factor in the rise in photonics in the Joensuu region,” Rector Jukka Mönkkönen says.

Leppänen considers the university’s activities to be important for the whole of eastern Finland both in terms of well-being and the economy.

“Nanocomp has been an international company right from the start, that is something that is inherent to us.  We have the entire world as our playing field. Our high-tech company will thrive by relying on solid expertise, specialisation, and mastery of tools brought about by digitalisation,” Leppänen says.

“Our technology is based purely on photonics, the growth of which has been and will be significant. Photonics is already everywhere, and will be even more so in the future: for example, in online sensors and, as a result, in business and other applications.”